Following a period of rapid advancements in technology, we now have access to an unlimited amount of statistics. But how can this information be used to aid our betting? 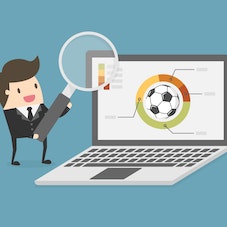 The use of statistics in betting

It’s not something bettors particularly want to hear but there is a strong element of good fortune attached to betting in general. You can read up on a specific team or player and find out all there is to know about the subject of your bet until the cows come home. Ultimately though, being at the mercy of the Sporting Gods, there are no guarantees of a bet succeeding.

Having said all this, the use of statistics can seriously enhance your betting game and give you a greater chance of beating the bookie. Even if you’re not a big advocate of stats in sport and tend to rely on a gut feeling as some proclaim to do, you’ll come to realise that you are still in fact relying on a whole load of stats without realising, such is the influence of statistics on sports and betting today.

Aided of course by the boom of the digital age, statistics can be found here there and everywhere on various platforms. But having access to something and using it in the right way are two separate matters entirely. Understanding how best to apply the use of certain statistics into specific markets is key to ensuring you make the most of the information at your disposal.

How to use statistics to help your betting game

It’s rare for a punter to bet blind and with no prior knowledge of what is they’re investing in. In which case, it’s fair to say statistics are used by the majority of bettors.

Casual punters who enjoy betting on football as a hobby for instance will use basic statistics in the shape of league tables, form guides and head-to-head records (H2H) before determining which way they’re to place their money.

More serious bettors will consider the above but also dig deeper into statistics highlighting the more intricate parts of the game, which can also be put to good use. A team may be averaging a certain number of corners per game for instance, while another could be particularly good at winning penalties, information that can potentially lead to money being made, if not directly but further down the line.

Those bettors serious about their game and fully trusting of the stats invest not only their money but also time in building betting models based on statistics readily available online. Building your own using programs such as Excel may seem unnecessary initially but keeping tabs on the relevant data and filtering through the needless stuff will see you make more informed bets which could prove to be a game changer in the long run.

Statistics to consider when betting on football

Identifying the important statistics to consider when betting on football, recently revealed as the most popular betting activity by the UK Gambling Commission, is no easy task when there is so much information doing the rounds on the internet.

Go back twenty years or so and technology was improving but a fairy slow rate. Fast forward two decades though and the incredible boom in technology means we know everything there is to know about a player, from how fast they run over 100m to how many 40 yard passes they make. It’s fair to say we are spoilt by the sheer amount of data available to us.

Exactly what knowledge is worthy of entering your thoughts process when making a bet though?

Considering the current league position of a side can sometimes be overlooked but it should be your first port-of-call when weighing up which way to hedge your bet. This isn’t worth doing when a campaign is in its infancy – it’s not uncommon for a league table to have less fancied teams leading the way after a positive opening run of games. But after ten games or so the league table should begin to take shape and serve as a basic yardstick to gauge how a team has been performing.

A quick snapshot of whether a side has won (W), lost (L) or drawn (D) their last six games for instance can provide more of a detailed insight into how a team is performing at any given moment. Websites often colour code a win (green), a draw (yellow) and a defeat (red) to give a clear representation of form and make it easy to draw quick conclusions. Though very useful, it’s easy to come unstuck counting on a team not to lose just because they’ve put a six-match unbeaten streak together. Good runs and bad runs are there to be beaten at the end of the day. Generally though, we’d rank recent form as a stat worth examining.

Players and managers come and go, especially in this day and age. But regardless of who’s in the dugout or taking to the field, a particular team may have a bogey side that for whatever reason they come up short against. Take Tottenham for instance, who prior to beating Chelsea at Stamford Bridge in 2018, had gone a period spanning 28 years without registering a victory at the home of the Blues. Another run deserving of a mention is QPR’s record at Nottingham Forest. The Hoops have never won at the City Ground in 34 attempts, a record which dates back to 1934!

Delving into goal stats to determine how potent a team are going forwards or their flaws at the back is a big deal and worth taking note of. As is knowing if a specific fixture is known for being an entertaining affair and always featuring goals, or an encounter where the two defences tend to come out on top. Goal markets such as both teams to score and Under/Over have never been as popular as they are today and are considered to very profitable providing you know your stuff.

Rapid advancements into the analytical parts of the game over the last five years has brought more advanced stats into football, some of which divide opinion but are definitely worthy of your attention.

Expected Goals (XG), as divisive as it is, is now a regular stat you’ll find ranked alongside the most common such as possession, fouls, bookings etc. But what is it and how can you apply it your betting.

What is Expected Goals (xG)?

As defined by Opta, Expected Goals (xG) measure the quality of a shot based on several variables such as assist type, shot angle and distance form goal, whether it was a headed shot and whether it was defined as a big chance, eg. 0.5 xG = should be scored 50% of the time

Taking into account a player or team’s expected goals can help give an insight into how many goals a player or team should have scored on average. In terms of betting, the metric, usually expressed as a number between 0 and 1 with 1 representing a certain goal, can be hugely beneficial in not having to rely purely on goals data which can sometimes be misleading.

You can no doubt think of many examples of a team having the better of the chances but not going on to win the game. The final scoreline on this occasion wouldn’t be representative of what actually happened in the match. XG simply allows for a player or team’s performance to be assessed without the luck or randomness element being present.

To illustrate how Expected Goals can help to uncover hidden elements of a team’s performance, you only have to look back at Juventus in 2015/16.

The Old Lady started Serie A in poor form, winning only three of their opening ten games, a run which cast huge doubt on Massimo Allegri’s position as manager. But looking deeper into their performance and at their Expected Goals, revealed they were dominating their opponent in terms of chances but just not being rewarded in goals. Surely it was only a matter fo time before Juve begun to put their chances away and eventually come good? Lo and behold they did, putting together a 15 match winning streak and securing the league championship comfortably in the end.

In terms of betting, if a team is not getting the results you’re expecting of them, then the Expected Goals metric allows more light to be shed on how they are performing in reality. This can be a particularly useful stat to consider using when you anticipate a streak coming to an end, as was eventually the case with Juventus.

Bringing it back to more simple matters, keeping tabs on shot metrics can be an effective stat to use as part of your betting. Even if a team hasn’t scored, total shots/shot on target columns may be fairly high which, if doesn’t show the ability to finish, at least demonstrates attacking intent, knowledge that you can apply to forthcoming games.

We’ve all watched a game where a side have been dominated in terms of possession, only for them to go up the other end and nick a victory. There’s no greater proof of possession not being important in the slightest than when Leicester City won the Premier League title in 2015/16.

En route they averaged the third lowest possession rate of all 20 teams in the division (44.8%), while their pass success rate, another fascination made a fuss of but not worth the time of day, was the worst in the league.

The same can be said for believing that an above average corner count means more chance of goals over a side with a below average tally which is simply not the case. The side with a higher count may not be very effective in making their corner routines count, while the side who win less may place more emphasis in maximising a smaller supply. Less can sometimes be more, as they say.

Are statistics the be-all and end-all of betting?

Using statistics in betting can enhance your prospects of landing a successful bet and also help level the playing field between you and the bookmaker. Even so, it must be remembered that using statistics should only be used as one of many factors considered before going ahead with a bet. Relying wholly on statistics is just not viable.

Why? Well there any number of elements out your control that may prevent a set of statistics standing up true to form - weather, travel arrangements, player injuries, team illness, managerial changes, change in formation are just a few but the list is endless. It’s easy to rely on stats but they can quickly become irrelevant if any of the aforementioned elements come into play.

Perhaps the best example of this occurs after a manager has been sacked. The subsequent ‘new manager bounce’ can often lead to a team to perform above and beyond anything than was expected of them at that time. To add further, the previous stats attached to the team can no longer be used so confidently due to the new ideas on philosophy, formation or player selection, the new coach will have.

Betting on the winner

Alternative betting markets than the winner

10 tips for turning a profit

How does a welcome bonus work?

Getting better at betting

What is bankroll management?

Asian Handicap - what is it and how does it work?

How a betting exchange works in practice

What is a betting spreadsheet? Organise and manage your betting

How does live-betting work?

How does cash out work?

What are sure bets?

Importance of beating the closing odds