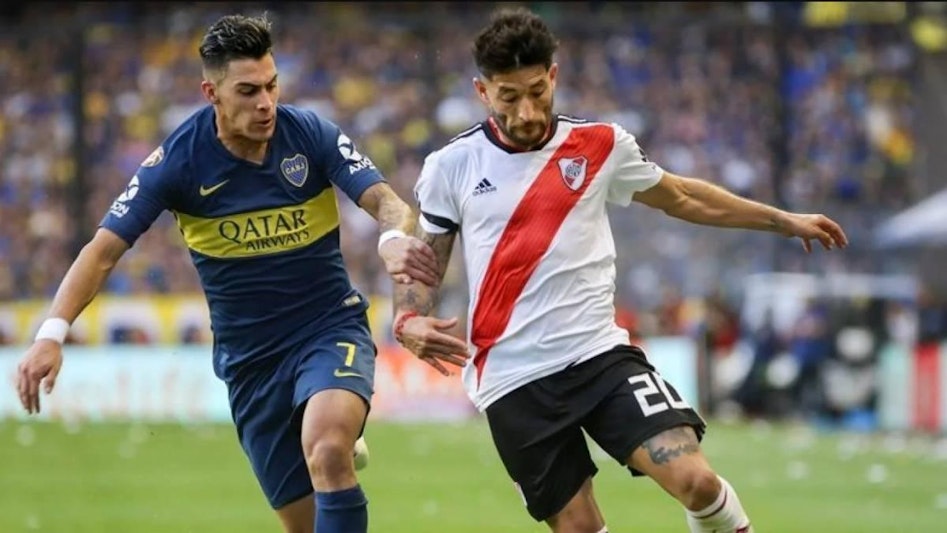 It’s the biggest game in South American football history. Bitter rivals from Buenos Aires Boca Juniors and River Plate meet in the final of the Copa Libertadores this Saturday night

Everything you need to know about the Copa Libertadores Final

Where is the match taking place?
The first leg of the final will take place at Boca Juniors’ home ground “La Bombonera”

When is the match taking place?
The match will kick off at 20.00 GMT which is perfect timing for viewers in the UK

Where can I watch the match?

Why is this game so special?
Boca and River are perhaps the greatest football rivalry in the world and they’ve never met before in the Copa Libertadores Final. Imagine Barcelona and Real Madrid meeting in the final of the Champions League!

The Copa Libertadores is basically South America's version of the Champions League and features some of the biggest teams and greatest talent the continent has to offer.

Two teams qualify from each league, with Brazil and Argentina each getting four teams.

The competition follows a traditional group stage format which begins in February with the top two teams from each group advancing to the knockout stages. The knockout stages comprise a round of 16, quarter final, semi final and final - each being played over two legs...including the final!

It's no surprise that Argentina and Brazil dominate the competition. The most successful team in the competition is Argentina's Independiente who have 7 titles. If Boca win this year they will equal the record.

Boca Juniors and River Plate couldn't be more different. They have two things in common. The first is that they hail from the same city - Buenos Aires. The second is that they hate each other.

There's no love lost between fans, players, managers and coaching staff alike. They're the two most successful teams in Argentina and represent opposing ideals. Boca are the poor team from the docks and the barrios. River Plate "Los Millionaros" (The Millionaires) relocated to the rich upper suburbs years ago.

Nothing has been the same since. Nothing encapsulates the intensity of South American football like the Boca Juniors - River Plate "Superclásico" rivalry.

Amazingly in the last six Superclásico derbies between Boca and River the home team has failed to win a single game.

Boca and River have met a total of 246 times in their history. They've played each other 210 times in the Argentine league and 24 times at various stages of the Copa Libertadores only never in the final.

Boca currently hold the best record for games between the two teams in the Libertadores.

Boca's impressive Libertadores campaign has come at a cost to their league form as of late and they've slid down to seventh place in the national league with only 18 points after 11  games.

They go into their tie with rivals River having only been defeated once in the last five outing, racking up two wins and two draws in the process.

Boca's road to the final has been impressive to say the least, having only lost once in the groups stages to an impressive Palmeiras team who currently look set to storm ahead to the Brazilian title.

A two legged final would suit them well

They've met opposition from Peru, Colombia, Brazil and Paraguay on their way to a home final finish. They sealed their place by overcoming Palmeiras in a convincing victory at home and holding the Brazilians off to a 2-2 in Sao Paolo.

Boca have drawn five times throughout the competition but a two legged final would suit them well. In the quarters they played their home fixture first just like they will in the final and have capitalised on first leg leads to hold opposition to draws away from home.

Boca's Road to the Final

River have endured a slip in form lately that has seen them lose three of their last five games, including two losses in the league as well as their first leg semi final tie in the Libertadores to Grëmio. Their most recent loss came at the hands of Estudiantes.

Like their rivals from across the road River's journey to the Libertadores final has seen them endure five draws.

Unlike Boca Los Millionaros have had a less varied affair when it comes to opposition. In the knockout stages they've only met Brazilian and Argentine opposition which would see them suited to seeing off a domestic foe in search of South American preeminence.

River's Road to the Final

Players to look out for